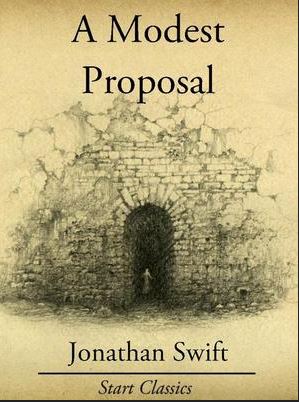 A Modest Proposal is worth addressing on its own because it’s a funny, shocking piece that was my first experience with satire (or sustained irony), and it describes Swift’s style succinctly. We also discussed Daniel Defoe’s satirical wit in a previous post, which might very well have been a source of inspiration for Swift (among a variety of other authors).

To sum it briefly, A Modest Proposal is a snarky essay that Swift wrote that discusses the poor conditions of the Irish people and it argues that they should sell their children as food to the wealthy elites. These elites could be the British, who Swift believe have had a negative impact on the Irish economy.

As Swift states in A Modest Proposal, “Infant’s flesh will be in season throughout the year, but more plentiful in March, and a little before and after,” and later, “Supposing that one thousand families in this city would be constant customers for infants flesh, besides other who might have it at merry meetings, particularly weddings and christenings …” It’s a lot funnier if you get the spirit of the thing.

Others have suggested that Swift was merely pointing out the crazy, catch-all solutions that were often offered by the ruling class. But, there are other matters in A Modest Proposal aside from just selling babies to cannibalistic elites. Swift recognizes that Irish politicians don’t benefit the Irish populace any more than the English exploit the Irish. In other words, both the Irish politicians and English politicians aren’t working for the Irish population’s benefit. As such, Swift’s proposal would (though not seriously) line the pockets of families looking to sell their babies and would therefore make children a valuable commodity.

That pretty much sums it up! It’s grisly but worth a read because it really draws attention to the problems of Swift’s day, and, I think, if one looks closely enough, you can see how the themes of A Modest Proposal are still relevant today in its ideas of exploitation and ineffectual representation.