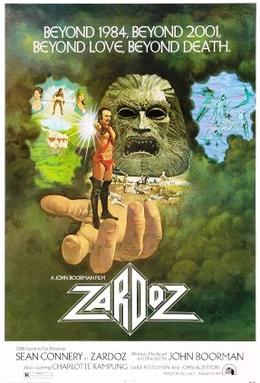 To conclude that John Boorman’s 1974 science-fiction, adventure-fantasy film Zardoz is merely silly tripe is overlooking the importance of what it states about the perils of humanity and our preoccupation with immortality. A movie with a talking head that proclaims, “The gun is good and the penis is evil,” before vomiting rifles forth and onto a hungry crowd shouldn’t be this prescient.

Yet the film walls itself up with deep metaphor and intricacy pulling its themes and ideas from Nietzschean philosophy and popular fantasy novels, such as the LOTR series (years later Boorman called Zardoz “hubristic,” but I think it still says something particular about humans).

Today we are going to examine some aspects of this film because it has a literary reveal and deals with important themes found within literature, including immortality and the fate of a species that reaches such an end.

“I am Arthur Frayn, and I am Zardoz. I have lived 300 years, and I long to die, but death is no longer possible. I am immortal.”

What is immortality as presented in Boorman’s Zardoz? From the film’s perspective, it seems to be that living forever and realizing that without the specter of death hovering over one’s shoulder…there isn’t much out there. Such as it is, this statement brings us into confrontation with the idea of ennui, and that’s okay if you are not familiar with it, because we are about to define it before exploring its relationship to the film.

The Merriam-Webster definition of “Ennui” will give you something like this: “A lack of spirit, enthusiasm, or interest,” which is certainly a pervasive element in the film. A more accurate definition comes from Cambridge, which states that “Ennui” is, “a feeling of being bored and mentally tired caused by having nothing interesting or exciting to do.” Essentially, the film attempts to capture this emotion and use it as a warning for stagnating cultures.

Into a world of eternal life, he brought the gift of death. (Tagline)

In the film, the Eternals, who have found a way to live forever in their near-impenetrable home “The Vortex,” meet for psychic-meditation seances to provide insight (and perhaps amusement) into and for their own lives. They have immense power, too: they can physically age the unwanted, and blind those that stare too intently.

Yet, they are listless.

They have found the world’s secrets, the universe’s, too, and have nothing left to discover, which puts them in a state of apathy. They are disinterested in life and have thus taken to juvenile displays of power and control–and an overwhelming interest in Sean Connery’s Zed, as he sneaks into their world from the outside and represents the barbaric nature of humanity that no longer exists. There is an otherworldly, unnatural feeling in this new world: people stand about absently, food is spontaneously produced, and there are images that appear and disappear, both haunting and disturbing.

Zardoz speculates on the notion of forever and the sadness and apathy that infinite reality brings, as the film eventually turns to an examination of society in its twilight throes: some humans live forever (the Eternals), some don’t care (the Apathetics), and some want to be set free from the hell of ceaseless life (Arthur Frayn). Connery, meanwhile, has been puppeted into becoming a well-read, intellectual human, yet one who is still savage enough to tap into his bestial side–a side that cannot exist in the arms of ennui. In essence, he is able to undo the threads of the new society through violent rebellion, and he starts the world anew.

As one of the Eternals exclaims to her fellow Vortex dwellers shortly before being killed by Zed: “Now, we must make our farewells: to each other, to the sun and moon, trees and sky, earth and rock, the landscape of our long waking-dream.”

The complexity of the film lies under a superficially-crafted narrative that guises the Nietschean ubermensch thrust; all of which asks the audience to play along with some of the outlandishness (strange rings, dueling elderly folk, unabashed violence). Yet, the spectre of forever hangs over the picture, even in the final moments when Connery and costar Charlotte Rampling sit side-by-side and decompose into skeletons as time finally marches onward and a natural order is restored.