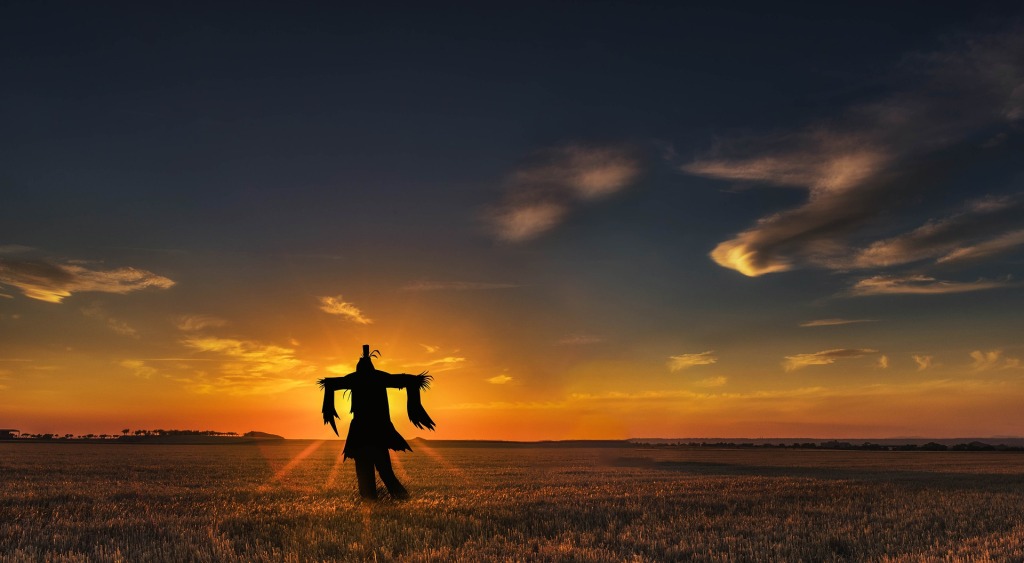 “Good day,” said the Scarecrow, in a rather husky voice.

“Did you speak?” asked the girl, in wonder.

“Certainly,” answered the Scarecrow; “how do you do?”

“I’m pretty well, thank you,” replied Dorothy, politely; “How do you do?”

“I’m not feeling well,” said the Scarecrow, with a smile, “for it is very tedious being perched up here night and day to scare away crows.”

A good way to look at characterization is to just examine the root word character and imagine all of the things that make a character tick. In a recent post, I discussed giving your characters likes and dislikes to create more interesting, and compelling, people. We can look at the characterization in The Wizard of Oz similarly. Who is Dorothy Gale? Who is the Scarecrow? The Tin Man? The Cowardly Lion? What qualities do they possess? At least one of those characters already has a bit of characterization in their name, but how would we describe the others?

“Characterization refers to the process of describing the appearance, action, and thoughts of the persons discussed within a text. Characterization is an important part of description, because it causes readers to more fully understand the motivations of characters. Effective characterization works in harmony with setting and plot to make the reader connect on a more intimate level to a text” (Colorado).

Moreover, the website states that to really develop good characters, one should focus on the smaller details of their life (much like the interview technique discussed in a previous post). Where were they born? Who were their parents? How educated is the character? Etc.

These pieces of information inform us of the character’s interests and feelings. Let’s take a look at some examples from the book.

In this chapter, Dorothy does exactly as the title states, and makes a new friend on her journey from the Munchkin land to the Emerald City. The Scarecrow is stuck on a post and can not move from where he is set, so Dorothy takes plight on him and removes him from his imprisonment (much as she had freed the munchkins).

We have some obvious and less obvious characterization in this chapter. For starters, Dorothy has already been revealed to be an empathetic character who cares about those around her by unintentionally freeing the munchkins from their slavery. Now, in chapter three, we actually see Dorothy intentionally doing something that speaks to her character by freeing the Scarecrow from his “bondage.”

The Scarecrow, we learn, lacks confidence in himself and this is revealed in both his literal characterization and his metaphorical characterization. That is, he is literally a scarecrow, left in a field without company and stuffed with straw, so he lacks a brain (and blood and organs for that matter). This is who he literally is.

“Dorothy leaned her chin upon her hand and gazed thoughtfully at the Scarecrow. Its head was a small sack stuffed with straw, with eyes, nose and mouth painted on it to represent a face. An old, pointed blue hat, that had belonged to some Munchkin, was perched on his head, and the rest of the figure was a blue suit of clothes, worn and faded, which had also been stuffed with straw. On the feet were some old boots with blue tops, such as every man wore in this country, and the figure was raised above the stalks of corn by means of the pole stuck up its back.“

Metaphorically, we understand him to have low self-esteem (or at least he represents a failure to understand one’s own capabilities), which drives his goals to journey with Dorothy to the Emerald City where there is a chance for him to receive a brain. We learn this about the Scarecrow through his own words when he speaks to Dorothy about his desires and ambitions.

“I don’t mind my legs and arms and body being stuffed, because I cannot get hurt. If anyone treads on my toes or sticks a pin into me, it doesn’t matter, for I can’t feel it. But I do not want people to call me a fool, and if my head stays stuffed with straw instead of with brains, as yours is, how am I ever to know anything?”

Good characterization should serve the plot in some way, too. We learn about the Scarecrow in chapter three, but we also learn more about the theme and what the story is trying to tell us and how it might end. Likewise, we learn more about our protagonist, which serves the plot, because we need to know how Dorothy will respond to trouble when it presents itself.

Leave a Reply to The Reading of Oz: Chapter Four (Summary and Analysis) – The Writing Post Cancel reply