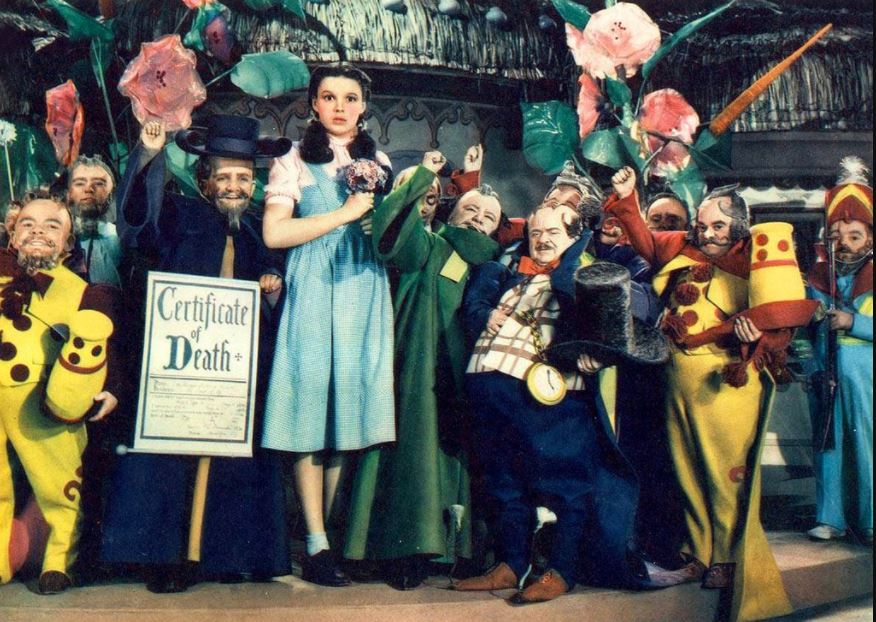 It really matters where you are in The Wizard of Oz, and I do not mean which page you are on currently. I am talking about the setting, geographic location, and (as we find out) where you are literally standing.

In chapter one, I pointed out that both Uncle Henry and Aunt Em are products of their setting. Their lives have been hard, and the land has made things tougher on them, and L. Frank Baum tells us that they both look “gray” because the life has been sucked out of them due to the hardships they have endured. In chapter two, we learn more about the setting of the novel and why where one is located on the map matters, and, though not as seriously, how that impacts one’s lifespan.

Chapter Two Summary: The Council with the Munchkins

Dorothy arrives in Oz via the cyclone, which lands harshly and jolts her awake from her slumber. Immediately upon exiting the house, she meets some of the inhabitants of this strange land, a witch and a few munchkins. To her dismay, she learns that her rough landing caused quite a stir, as her grand entrance killed the Wicked Witch of the East.

“Dorothy looked, and gave a little cry of fright. There, indeed, just under the corner of the great beam the house rested on, two feet were sticking out, shod in silver shoes with pointed toes” (Baum). Dorothy is distraught, because she was “an innocent, harmless little girl … and she had never killed anything in all her life.”

This is a nice touch of character and softens the reader to Dorothy’s disposition.

She is consoled by the Witch of the North (the good witch), who tells her that the Wicked Witch of the East was a monstrous person who had kept the munchkin people in “bondage for many years, making them slave for her night and day,” which seems like a really terrible way to live your life as a munchkin.

Regardless, the munchkins are now in Dorothy’s debt for freeing them, and she is gifted the silver shoes that once belonged to the now deceased witch, and she is also given directions to the City of Emeralds, where she can find the Great Wizard of Oz.

As the good witch tells her: “’The road to the City of Emeralds is paved with yellow brick,’ said the Witch; ‘so you cannot miss it. When you get to Oz do not be afraid of him, but tell your story and ask him to help you. Good-by, my dear” (Baum).

As we know from the film, and from what we can infer using prior knowledge, Dorothy’s journey truly begins in the next chapter.

Analysis: It is where you plant your roots that matter

As previously stated, it matters where you live, and it matters where you stand. Uncle Henry and Aunt Em are colorless forms because the land has taken the life out of them, and yet we see that is not always the case in Baum’s work, because we find colorful inhabitants of Oz waiting just at the other end of the cyclone. The contrast is intentional, and, in fact, if you were to watch the1939 film, one could surmise that this juxtaposition is exactly why the first part of the film is in black and white and the other two-thirds are in full color.

Additionally, the munchkins live in a beautiful world and we can assume that they would otherwise prosper if it were not for the “bondage” of servitude that they have been placed under by the Wicked Witch of the East. Therein, we see that geography matters because the land has not robbed them of their joy. Yet Oz is not without treacherous locations.

The East and South feature a massive desert that is impassable by anybody, and so does the West, which also has the last Wicked Witch on the lookout for people foolish enough tread her land.

Meanwhile, in the North:

“’The North is my home,’ said the old lady (the good witch), ‘and at its edge is the same great desert that surrounds this Land of Oz…’” (Buam).

So, it is indeed a dangerous place, but we are given more directions—directions to the City of Emeralds—which help us as the readers navigate this world; and all of this matters, because the munchkins prosper in their land even though danger is right next door, and things are even pleasant in the North, but East and West are dangerous, as is the great desert. In other words: Baum is informing us of our characters intentions by the very location they reside.

The Good Witch even makes it a point to tell Dorothy that “there are no witches left; nor wizards, nor sorceresses, nor magicians” in civilized places like Kansas, but that such things are alive and well in the Land of Oz.

Lastly, lest I stray too far into the reeds, while geographic location matters, it also matters where you stand in general. In the last chapter, Dorothy was standing in the house when she was picked up from the storm, while Uncle Henry had run to the stables and Aunt Em had hidden in the cellar. Now, in chapter two, the Wicked Witch of the East was unfortunately standing under the house as it landed roughly on her old bones.