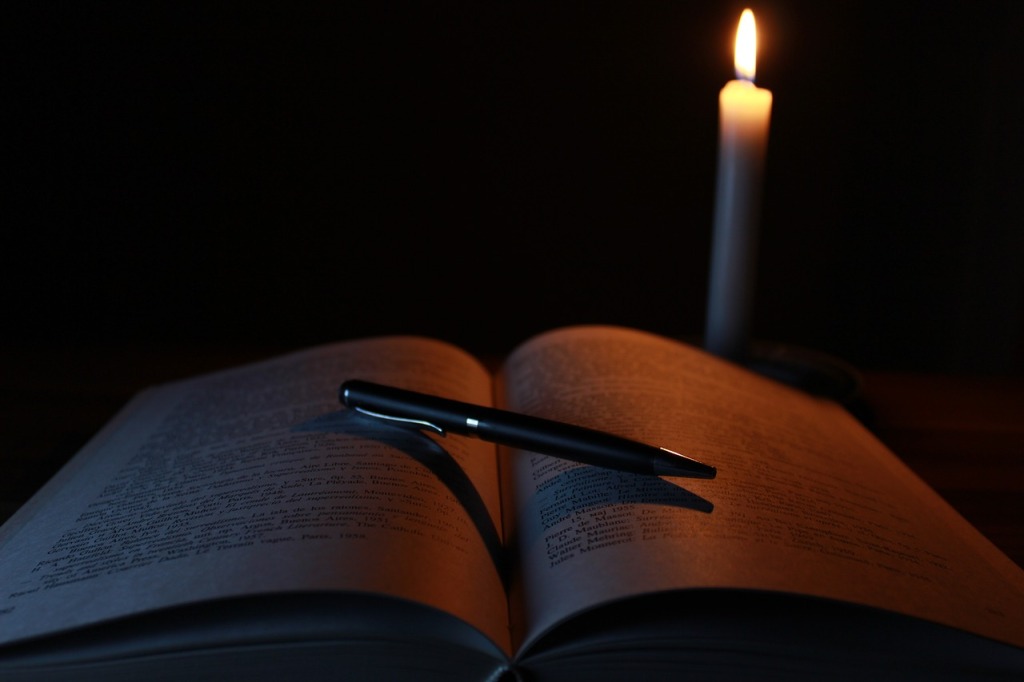 I am certainly familiar with the Necronomicon—I even tried to look it up at my local library once because I heard a story about somebody actually creating an index card for it and stashing it away for some poor soul to find (I never found it)–but, with the existence of the Necronomicon (in fiction anyway) that makes me assume that there are a lot more evil books in different shapes and sizes out there.

So, let us start our post today by looking at that evil, old book and then take a look at some (real and fake) books that have an aura of, how do you say, EVIL!

We will start with the MacDaddy of evil books so the rest in this list can act as a comparison. The Necronomicon is “bound in human flesh and writ in human blood” and in some fictional depictions (looking at you Raimi) has the face of a creature (or man) emblazoned on the front.

In Arabic, it was known as the Kitab al Azif and was written by Abdul Alhazred, who “was a poet in the court of a minor nobleman in the city of Sanaa.” While living in Damscus, the Mad Arab penned the Necronomicon, which, I suppose, was good for him to get his writing out, but bad for the rest of the world, as it is a cursed book that will drive you mad, bring back the Elder Gods, or raise the Deadites (and maybe stop Jason Voorhees if I watched Jason Goes to Hell right). So, definitely beware of this text!

The Hammer of Witches by Heinrich Kramer and Jacob Sprenger (1486)

Also known as the Malleus Maleficarum, The Hammer of Witches was very much a real book that described the particularities of witches themselves and provided the intellectual and theological weight “witch-hunters” (murderers) needed to falsely accuse and slay those who were, according to them, consorting with the devil. The book was first published in 1487 and “challenge(d) all arguments against the existence of witchcraft” and “instruct(ed) magistrates on how to identify, interrogate and convict witches” (Malleus Maleficarum).

Both authors, Kramer and Sprenger, were members of the Dominican Order and were Inquisitors for the Catholic Church. While Kramer and Sprenger seemed like insufferable creatures who lusted after power, their attempts to get this wretched book endorsed by the Church was “rebuffed.”

“Whether or not the work was ever officially banned by the Catholic Church, the Malleus Maleficarum became the de-facto handbook for witch-hunters and Inquisitors throughout Late Medieval Europe.”

So, regardless of snubbed, it still provided a lot of misery in the 1400s for a lot of innocent people, and that makes it pretty darn evil.

The first time you see this episode of The Twilight Zone (1959), it’s terrifying (it certainly was for me) and subsequent viewings either make you giggle or frustrate you because you just want everybody to see the truth behind the alien’s ploy.

Spoiler for the episode following this warning…if you have not seen it, go watch it first!

The book To Serve Man by a Kanamit chef is not a rules and regulation book intended to describe the alien race’s subservience to man. No, no, no. It is a gosh-darned cookbook. They are literally talking about serving man as a dish. I assume it must be pretty good, too, because they whisk away a ton of people into space to feed their insatiable, cannibalistic urges.

“The recollections of one Michal Chambers (protagonist) with appropriate flashbacks and soliloquy. Or more simply stated, the evolution of man. The cycle of going from dust to dessert. The metamorphosis from being the rulers of a planet to an ingredient in someone’s soup. It’s tonight bill of fare from the Twilight Zone.”