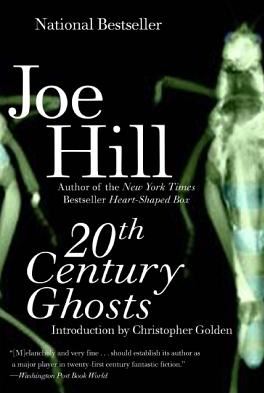 I did not know who Joe Hill was when I read 20th Century Ghosts, so I was surprise to learn that it was Stephen King’s son. Surprise also hit me over the head because it turns out that writing definitely runs in the family (and let us not mythologize here—Hill learned that skill from his pa pa). With that being said…I love 20th Century Ghosts and I think it has some of the finest horror/reflection/dramatic stories I’ve read in a long time.

20th Century Ghosts is a short story collection that features 19 excellent stories from a unique (and somehow familiar) writing voice that successfully builds on the tropes of horror without boring or confusing the reader.

It was released in Oct. 2005 (great timing, honestly) under PS Publishing. It won multiple awards including the Bram Stoker Award for the best short story collection and the British Fantasy Award, as well.

And all these encomiums are well deserved, in my opinion.

I really can not recommend this book enough. Some of the story highlights include “Best New Horror,” which terrified me for its atmosphere, descriptions, and for what it does not include (perhaps even what it alludes to)—please read this one for sure!

The more reflective “20th Century Ghost” pulls the reader into the world of movie theatres and ghosts; but it is also a story about aging and the world slowly moving on (if you can get behind that). It is moments like this in the collection (jumping from intense horror to reflection) that raises this book to another level.

“Pop Art” is one of my favorites because of the emotional relationship between the narrator and his friend, which, much like “20th Century Ghost” pulls the reader away from the idea of horror as some awful creature hiding in the dark and reminds us that it can also be the sadness of a friendship and how cruel the world is when you are a misanthrope.

Lastly, “Abraham’s Boys” is a great read for anybody that has ever had a dad or somebody with a father figure, so it is pretty much for everybody, because even outside of the “father figure” theme, there is an excellent story about growing up and parsing fact from fiction.

Good short story collections can be hard to come by because, unfortunately, there are a lot of bad or boring stories out there, but that is simply not the case with 20th Century Ghosts. You really get a nice collection here with lots of different stories and fiction elements.

Also, it is October, so go buy a copy, because the book gets pretty creepy, too.