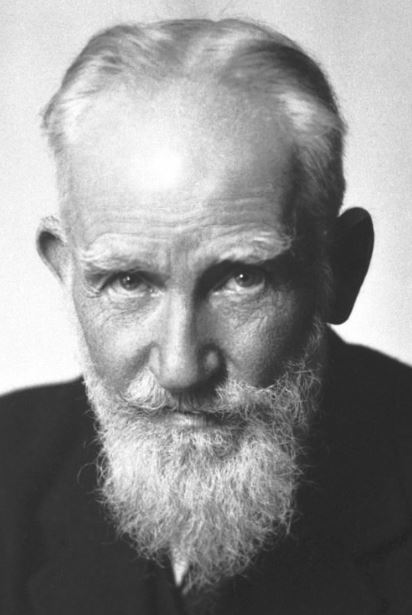 As I looked for things to write about for the blog, George Bernard Shaw’s name popped up and I didn’t immediately recognize any of his work, although I have heard his name mentioned in literary circles a few times. He is definitely a fascinating character and produced some fine work, so let’s take a brief look at the man’s life and career!

Shaw was born in Dublin on July 26, 1856. He was the third child in his family and hated school (not an unusual trait). He eventually worked in an estate agent’s office before moving to London in 1876. There, he struggled to find work through multiple jobs and eventually settled on pursuing a fulltime career as a writer—with mixed results.

“Despite his failure as a novelist in the 1880s, Shaw found himself during this decade. He became a vegetarian, a socialist, a spellbinding orator, a polemicist, and tentatively a playwright.”

The Fabian Society and critic

In 1884, Shaw joined the Fabian Society (a group that spent time trying to advance the principles of democratic socialism) and used his writing abilities to craft pamphlets and to debate the application of such beliefs.

Somewhere in the midst of novel writing failure, Shaw began critiquing plays for the papers in London and became quite successful.  He worked as a critic for the Pall Mall Gazette, The World, The Star, and The Saturday Review.

“Shaw had a good understanding of music, particularly opera, and he supplemented his knowledge with a brilliance of digression that gives many of his notices a permanent appeal … he also began writing his own plays.”

Shaws first collections of plays were published in “Plays Unpleasant” and “Plays Pleasant,” which were replete with “what would become Shaw’s signature wit, accompanied by healthy doses of social criticism, which stemmed form his Fabian Society leanings” (biography.com).

With the 19th century coming to a close, Shaw really began churning out his best work. He wrote Man and Superman in 1903 and Major Barbara iin 1905, and Pygmalion in 1912.

In 1925, Shaw was awarded the Nobel Prize for literature for Saint Joan. He died in his home in England in 1950 at 94 years old.