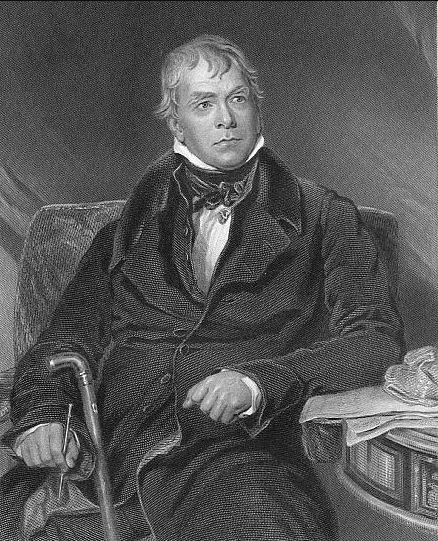 When I think of Sir Walter Scott, I think about Smailholm Tower, where under its looming shadow he was raised on romantic, adventurous tales of heroes and villains; and, with this tower over his head, he was compelled to read great literature and poetry ( by previous legendary authors, of course). There, on the shores of Sandyknowes, Scott created a future for himself using his imagination, as his gift for storytelling and verse would guarantee him a spot in literary history.

Scott was born in Edinburgh’s Old Town on Aug. 15, 1771 to Anne Rutherford and Walter Scott, who was a member of the private Scottish society Writers to the Signet. At a young age, Scott contracted polio, which caused him to have a lame leg for the rest of his life, even though he would come to be a man of stature (literally).

Scott was later sent to live with his grandparents near the border area of Roxburgshire, which was some 30 miles from Edinburgh. Scott’s Aunt Janet (or “Jenny”) urged him to pursue his literary interests by reciting poetry to him and teaching him to read.

As historic-uk.com states: “His grandmother Barbara would also keep they young boy amused with stories of their ancestors and the border battles between the Scots and the English. It was then that Walter developed his enduring appreciation of ballads and his keen interest in the Scottish Heritage.”

As he got older, Scott’s interests in epics, poetry, and books about far away voyages did not wain. He attended the University in Edinburgh to study the classics in 1783 and in 1786, Scott began “an apprenticeship at his father’s office with the intention to become a Writer to the Signet” (history-uk.com). Scott would become a lawyer in 1792 and begin translating books into English for his friend who he would open a publishing house with in 1809 (John Ballantyne).

Scott would produce a series of poems for the publishing house, including The Lady of the Lake, and Marmion (1808). Soon after, Scott began publishing his Waverly novels after the success of the first, and continued writing over the years, producing novels of epic reputation (in some part due to the financial struggles of the publishing house and himself).

Scott suffered a stroke in 1831 and passed away on Sept. 21st, 1832 at Abbotsford and was buried by his wife in the border town of Melrose.