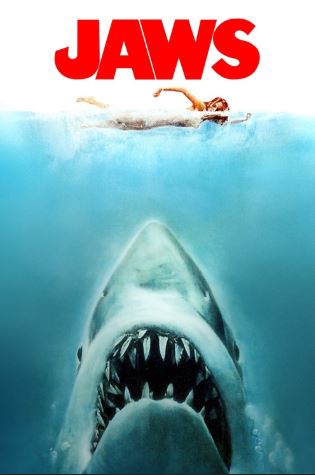 The book Jaws is a super interesting read. I remember getting a copy during the last few weeks of my senior year in high school from a library giveaway (it was an old copy and the library wanted nothing to do with it [I still have it over a decade later and it’s kept together with care and duct tape]). Now, I had already seen the movie and was spending my summers dressing like Quint (red bandana, blue jeans, and a blue shirt) because I was obsessed with the film. As it turns out, I really enjoyed the book, too, and I assume if you read it, too, then you probably love the level of horror, adventure, and Benchley’s style in conveying those themes.

So, let’s take a look at the classic summer novel about a man-eating shark and the people who got in its way.

“In 1964, I read a newspaper item about a fisherman who caught a 4,555-lb Great White Shark not far offshore from Montauk, Long Island, and I wondered what would happen if such a huge shark were to appear in a seaside resort community,” Peter Benchley writes on peterbenchley.com. “I did nothing with the idea then, but seven years later I began to weave it into the story that would become the novel Jaws.”

At the time Jaws was published, Benchley was an accomplished writer but wasn’t making enough money to support his family even though he had been a junior speechwriter for Lyndon B. Johnson and had written as both a staff writer and freelancer for large publications. His last ditch effort involved getting together with a few publishers and pitching some ideas including a nonfiction book about pirates and one about a man-eating shark.

As reported by Christopher Hawtree, writing for The Guardian: “ In 1971, he (Benchley) was asked by Tom Congdon, an editor at the publishers Doubleday, if he had anything in mind for a book … he produced a hundred pages, and, with a $1,000 advance, he reworked it steadily, holing up to do so …”

The book was published Feb. 1974 and was met with success, possibly because Benchley had “tapped into a widespread primeval fear of the deep.”

Jaws is about Sheriff Martin Brody who oversees the small seaside town of Amity. His tenure as sheriff is met with bloodshed, as a terrifyingly massive shark has begun stalking and murdering the townsfolk and summer-goers whose money keep the little town alive during the winter months. A vile motive in the book features the mayor of Amity, Larry Vaughan, trying his damndest to keep the beaches open to maintain the economy of the town at the expense of lost lives (he has some mob ties to push his character in that direction).

After becoming flummoxed as to how to defeat such a carnal, visceral evil, Brody and oceanographer Hooper take up with Quint, a shark hunter, and begin minor excursions and confrontations with the shark at sea. Together, they are able to defeat the seafaring monstrosity, though Hooper and Quint are killed violently in the process.

Differences between the book and the movie

The book differs greatly from the movie in its interpersonal matters. Hooper (Richard Dreyfus’s character in the movie) has an affair with Brody’s wife and is ultimately killed off in a shark cage. While the shark cage fits in the movie, his death at being dislodged from the cage and eaten by the shark is not. Quint (Robert Shaw in the film) is also less bloodthirsty for shark blood in book but suffers a similar fate from the one in the film and is dragged like Captain Ahab from Moby Dick to the depths of the sea. Brody also doesn’t kill the shark with a pressurized canister and instead watches from the sinking boat (The Orca) as the shark succumbs to its wounds after it had been harpooned a number of times by Quint.

Why this book is great

While there is a lot of seemingly useless backstory in the book (from the mob to the affair), Jaws paints a great picture of a seaside summer town not unlike one I had spent my summers visiting in Michigan as a young man (sometimes nostalgia is the key ingredient). And the multiple interactions with the shark are full of energy and just fun to read. For me, both the book and the film have some really great moments that are interesting and engaging, especially if the audience doesn’t mind a little suspense.

The Guardian: Peter Benchley: He was fascinated by the sea, but his bestselling novel tapped into a primeval fear of the deep.”